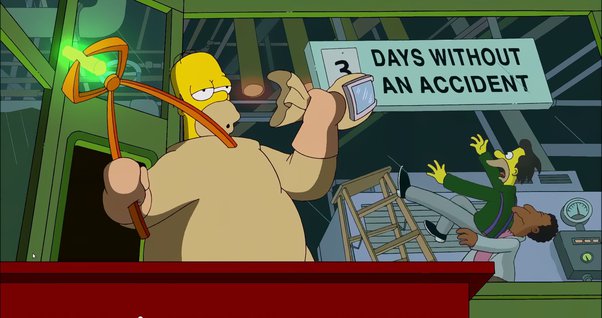 Trained workers at the Pilgrim nuclear power plant in Massachusetts are claiming  that skilled nuclear technicians are being replaced by unqualified “Homer Simpsons” as a way of cutting labor costs for the plant’s new owner, Holtec International.

Holtec’s legal record includes criminal activities such as bribery and outright lying to elected officials, so it is no surprise that the company has serious management problems that have manifested in the form of poor labor relations.

Holtec International is on record as lying to the State of New Jersey about the fact that Holtec was debarred (banned) from doing any business with the Federal Government’s Tennessee Valley Authority.  Holtec lied to elected officials about this criminal activity because it did not want the State of New Jersey to know that is has a history of bribing federal employees.

For Holtec to succeed, a power plant  must fail.  Holtec has gained its riches exclusively from failed nuclear power plants and their generously endowed Decommissioning Trust Funds (DTFs).  With a complex network of “do-nothing” paper holding companies, Holtec can limit its liability for handling and owning nuclear waste. In other words, Holtec not only specializes in wringing money out of failed nuclear power plants, but its corporate strategy relies on incorporating temporary shell companies that are built to fail as a way of limiting corporate liability and accountability.

First: Holtec’s thin-walled waste storage containers are only guaranteed to last 10 to 25 years (get the 25-year Holtec Warranty here).

Second:  Nuclear waste is deadly for at least a quarter-million years.

The technicians at the Pilgrim nuclear power plant know that nuclear waste is forever, and they have a right to be concerned.  As noted above, Holtec’s policy is to package this forever-deadly waste in delicate temporary containers with a 25-year warranty, and to do it with poorly trained and unqualified workers.

At this time, there is global natural gas shortage due to harsh winters, the Ukraine crisis, and increased demand. However, the current prices hikes for customers of Southern California Gas, SDG&E,  and ultimately, Sempra Energy, may be completely unjustified and should command the attention of energy regulators. So far, SDG&E has claimed that it is unlawful for them to make a profit on natural gas sales... END_OF_DOCUMENT_TOKEN_TO_BE_REPLACED

QUESTION:         Why are Compressed Natural Gas Prices SO high? ANSWER:       The utility companies claim: elongated cold weather spell brought with the rain CNG reserves low due to national temperature spikes Short commodity purchasing period   QUESTION:         What can consumers do to decrease their bills? ANSWER:            Consumers can: Turn down the thermostat Put on a sweater Fill any leaks that allow cold air to come inside... END_OF_DOCUMENT_TOKEN_TO_BE_REPLACED