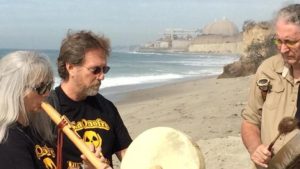 While political advocacy and legal intervention have yet to reverse the plan to bury tons of nuclear waste at San Onofre, activists are turning to higher powers, using prayer and meditation in the hopes of meeting their objective.

A coalition of Native Americans and community activists began a 30-day virtual meditation and prayer effort on Tuesday.

They hope to convince utility regulators and Southern California Edison executives to rethink their plan to store toxic spent fuel on the San Diego County coast for years to come.

“We are all interconnected, interrelated and interdependent,” Laura Lafoia Ava-Tesimale of the One Global Family Foundation during an hourlong telephone conference. “We must come together and unify and take a strong stance to protect Mother Earth.”

Charles Langley, executive director of the Public Watchdogs advocacy group, said he was not a religious person, but, “every legal and political solution for this problem has been exhausted. The only solution now is spiritual. We must find creative solutions for breaking this trance.”

Spent nuclear fuel has been stored in cooling pools at the San Onofre Nuclear Generating Station for years. After Edison closed the plant in 2013, the company sought to move the waste into canisters that will be buried.

The California Public Utilities Commission last year permitted the storage plan, a decision that was challenged in court. The case is pending.

Edison spokeswoman Maureen Brown said the company welcomes all the help it can get pushing the U.S. Government to come up with a permanent site for the nation’s spent nuclear fuel.

“Until the federal government provides for an off-site storage facility, as required by law, SCE will continue to safely store the fuel as we have done the past 40 years,” Brown said.

The prayer and meditation effort also supports the months-long protest at the Standing Rock reservation straddling North Dakota and South Dakota, where developers want to build an oil pipeline to Illinois.

Why are gas prices going up when the price of oil is going down? Get the  KUSI interview on this story  with Public Watchdogs’ Executive Director, Charles Langley   There is a schism in the scheme of things.  According to the “Laws of Supply and Demand,” the price of a commodity will increase when it is scarce, and decrease when it is abundant. As of this... END_OF_DOCUMENT_TOKEN_TO_BE_REPLACED

That metallic taste in your mouth?  It could be brain damage. People who surf  near the failed San Onofre Nuclear Generating Station (SONGS) are rumored to occasionally report a metallic taste in their mouth while surfing. Southern California Edison (SCE), the owners of the shuttered nuke plant, use a system called “Dilute and Discharge,” to dump radioactive water from its spent nuclear fuel pools into the... END_OF_DOCUMENT_TOKEN_TO_BE_REPLACED