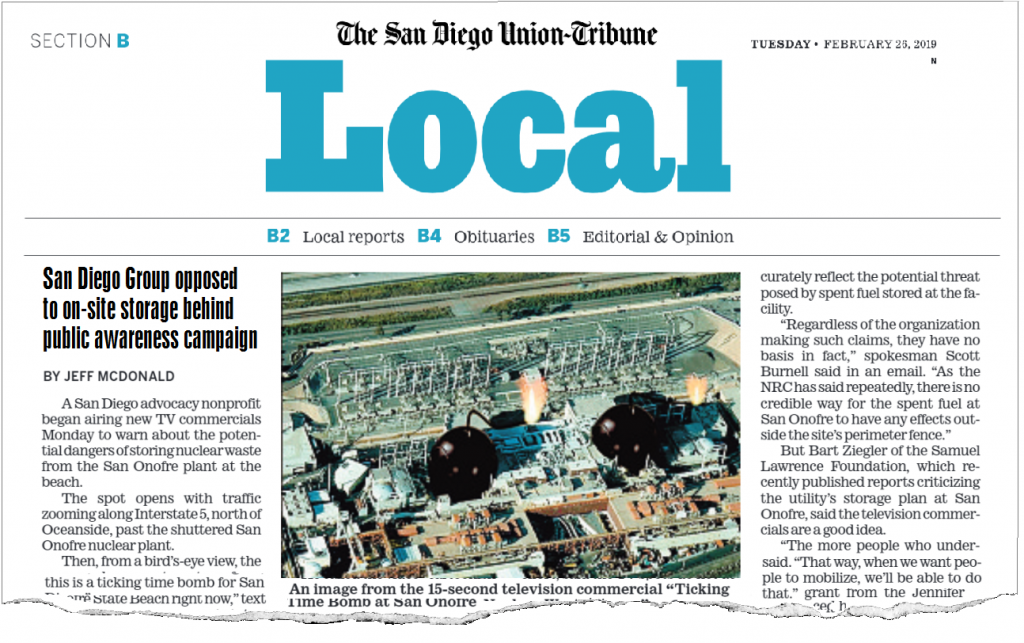 A San Diego advocacy nonprofit began airing new TV commercials Monday to warn about the potential dangers of storing nuclear waste from the San Onofre plant at the beach.

The spot opens with traffic zooming along Interstate 5, north of Oceanside, past the shuttered San Onofre nuclear plant.”

Then, from a bird’s-eye view, the twin nuclear reactors transform into black bombs with long fuses that spontaneously ignite amid a foreboding ticking sound.

The San Diego-based Public Watchdogs bought enough air time for the spots to run 135 times over five days, as an initial test case, and it will pursue additional screenings if need be, said Charles Langley, the Public Watchdogs executive director.

“It’s important because no one is aware there is a nuclear waste dump at San Onofre, and if they are aware they don’t know this is dangerous,” he said. “Our message is, this is a ticking time bomb for San Diego.”

Southern California Edison has been transferring 3.6 millions pounds of nuclear waste from cooling ponds into concrete canisters as part of the decommissioning process that began after the San Onofre plant closed for good in 2013.

Several environmental and consumer groups want the utility to move the waste away from the coast and further away from population areas in nearby Oceanside and San Clemente.

Radioactive waste has been safely stored along the San Diego County coast since 1970, with no adverse impact to employees, the public or to the environment, said Southern California Edison spokesman John Dobken.

He called the video “cartoonish” and said it reveals that Public Watchdogs “is not a serious, nor credible participant in the effort to move spent nuclear fuel” from San Onofre.

“Those who simply want to use the issue to fund-raise by misleading people with irresponsible videos designed to exploit existing community concerns, play on unfounded fears, and line the pockets of an organization that trades in false narratives and public anxiety, are detrimental to these efforts,” Dobken wrote by email.

A spokesman for the U.S. Nuclear Regulatory Commission, which is overseeing the decommissioning effort, said the TV spots do not accurately reflect the potential threat posed by spent fuel stored at the facility.

“Regardless of the organization making such claims, they have no basis in fact,” spokesman Scott Burnell said in an email. “As the NRC has said repeatedly, there is no credible way for the spent fuel at San Onofre to have any effects outside the site’s perimeter fence.”

But Bart Ziegler of the Samuel Lawrence Foundation, which recently published reports criticizing the utility’s storage plan at San Onofre, said the television commercials are a good idea.

“The more people who understand the nuclear waste around our nation, the better prepared we are to create safe solutions,” he wrote in an email.

Public Watchdogs is a relatively new organization. In October, it announced that it had received a $300,000 grant from the Jennifer Moores family and the Change for Justice nonprofit to help prevent nuclear waste from being stored along the San Diego coast.

Langley declined to say how much Public Watchdogs is spending on the TV commercials, which also are designed to collect contact information from viewers who may be opposed to the activity.

“We want to capture viewers’ cell phone numbers and ideally get them to sign a petition so we can stay in touch with them,” Langley said. “That way, when we want people to mobilize, we’ll be able to do that.”

Public Watchdogs, a nonprofit advocacy group, is expressing deep concern for the public’s safety regarding the 3.6 Million pounds of deadly radioactive nuclear waste stored on the beach, 108 feet from the Pacific Ocean, in a USGS designated tsunami inundation zone. END_OF_DOCUMENT_TOKEN_TO_BE_REPLACED

For Immediate Release Public Watchdogs learned today that the Supreme Court of the United States has denied our petition for a hearing regarding the right of private citizens to sue utilities over safety issues involving toxic high-level nuclear waste.   At issue is the storage of highly radioactive “spent” nuclear fuel.  3.6 million pounds of this  fuel, which is deadly once it is “used up” or “spent,”... END_OF_DOCUMENT_TOKEN_TO_BE_REPLACED