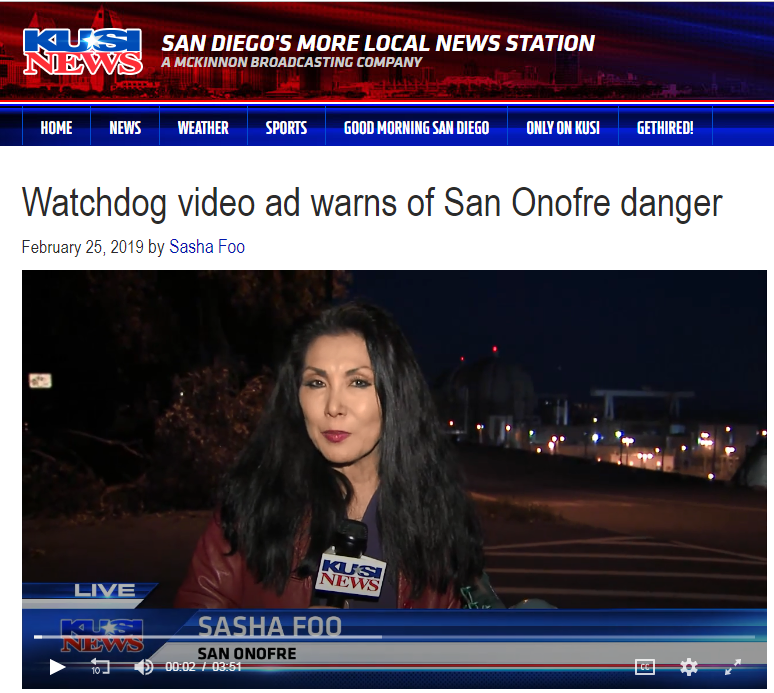 DATELINE, February 25, 2019:   SAN DIEGO (KUSI) – A nuclear safety watchdog group has released a new television ad that says the nuclear waste stored near the beach at San Onofre is a disaster waiting to happen.

Public Watchdogs based in San Diego has a 15 second TV ad that features shots of the now shuttered nuclear power with the sound of a ticking bomb and a caption that suggests the storage of spent nuclear on the site is a threat to public safety.

Charles Langley, the executive director of Public Watchdogs criticized Southern California Edison for moving three and a half million pounds of spent nuclear fuel into steel canisters which are then placed in a concrete block about 108 to 120 feet from the beach. Langley said a seismic event or rising sea levels could pose a threat to the canisters that store the radioactive waste.

The nuclear power plant was shut down in 2013, following a radiation leak in one of the reactors in 2012.

A spokesperson for Southern California Edison said the ad by Public Watchdogs was irresponsible and “played on unfounded fears.”

Retired nuclear engineer Ted Quinn said the transfer of the spent fuel into the protective concrete block was being done safely. Quinn, who sits on a citizens’ advisory panel for the plant said the Nuclear Regulatory Commission found no indication that the transfer of the waste into dry storage would endanger the public.

Yet, both the watchdog group and Southern California Edison agreed on the need for a plan to move the waste to a permanent repository. Currently, there is no storage site in the United States that is approved to accept commercial nuclear waste.

KUSI’s Sasha Foo has the story.

Public Watchdogs, a nonprofit advocacy group, is expressing deep concern for the public’s safety regarding the 3.6 Million pounds of deadly radioactive nuclear waste stored on the beach, 108 feet from the Pacific Ocean, in a USGS designated tsunami inundation zone. END_OF_DOCUMENT_TOKEN_TO_BE_REPLACED

For Immediate Release Public Watchdogs learned today that the Supreme Court of the United States has denied our petition for a hearing regarding the right of private citizens to sue utilities over safety issues involving toxic high-level nuclear waste.   At issue is the storage of highly radioactive “spent” nuclear fuel.  3.6 million pounds of this  fuel, which is deadly once it is “used up” or “spent,”... END_OF_DOCUMENT_TOKEN_TO_BE_REPLACED