Aerial photographer John Quigley and members of the Acjachemen Nation will join together on Saturday, June 9 at Trail 6, just south of San Onofre Nuclear Generating Station (SONGS) to take a photo that will depict one of the native people’s symbols, a “star man,” using people to outline the figure, Quigley said.

Quigley, who goes by the art tag “Spectral Q,” has taken photos all over the world, drawing attention to the earth’s resources and protected environments. He once took a photo in the Arctic Ocean of Leonardo da Vinci’s Vitruvian Man where the outline of the man could be seen over portions of melting ice. He’s also done work in Paris (pictured) in front of the Eiffel Tower. 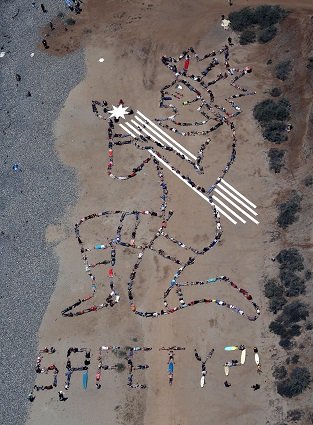 This photo was taken June 9th. Get more.

Get video from the helicopter here.

“We’re going to have hundreds of people, mostly from the Acjachemen Nation, and it’s an honoring of their ancestors,” Quigley said. “They’re going to lay down some wisdom for what they see as the best future for this region from SONGS and San Clemente, what they want from political leaders. I’ll be creating that (image) large-scale with people, and we’ll photograph from the bluffs.”

The event is meant to bring awareness to the natural resources in the surrounding area and the concerns the Acjachemen have regarding the area. 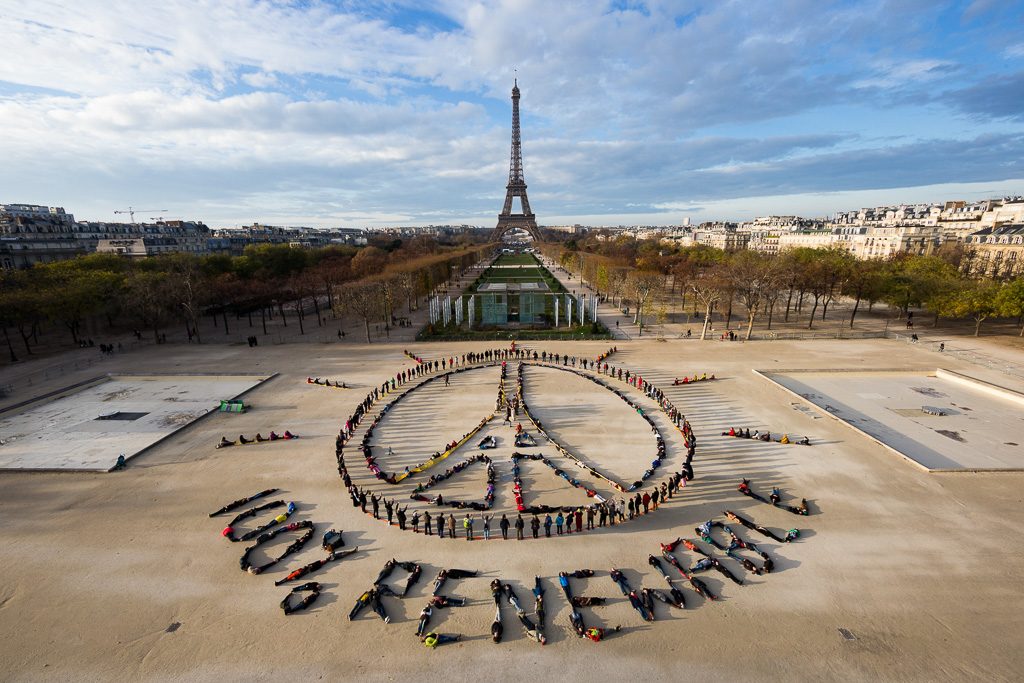 Around Trail 6 and SONGS, many leaders have worked with and demanded that the Department of the Navy return the land at San Mateo Campground and nearby areas to the native people, as it was once the fertile crescent of the Acjachemen and many artifacts have been found there. They also have concerns regarding environmental impacts.

“I know they have great concerns about the way in which the (nuclear) waste is being stored (at SONGS), and I’m sure they’ll make statements about that,” Quigley said.

Portions of the area that’s owned by the Navy were leased to the California State Parks for 40 years, but that agreement ends in 2021, with negotiations ongoing to renew.

The event takes place from 10:30 a.m.-2 p.m. at Trail 6, and anyone can attend. More information can be found by clicking here and here. Parking within the state park is $15. People are asked to bring rattles, two wood sticks or “clappersticks,” a water bottle, sack lunch and sunscreen. People are asked not to bring signs or drums.

Editor’s Note:  This content was reproduced by Public Watchdogs under the Fair Use Provision of U.S. Copyright law. Get the original story from the San Clemente Times here.

Holtec, the company that makes the nuclear waste canisters that are used at the failed San Onofre Nuclear Generating Station,  has conducted  a secret flood analysis of the facility. Public Watchdogs believes this analysis must be made public. The public has a right to know why the NRC is allowing private companies like Holtec to keep an ISFSI flood analysis a secret, when ultimately, it was the public that paid for it. END_OF_DOCUMENT_TOKEN_TO_BE_REPLACED

Public Watchdogs has warned the Nuclear Regulatory Commission that deadly radioactive geysers could erupt from the San Onofre Nuclear Generating Station, much like the "Old Faithful" geyser at Yellowstone National Park. According to the report, such an accident could rival Chernobyl, Fukushima, or Bhopal in scope. END_OF_DOCUMENT_TOKEN_TO_BE_REPLACED

Yesterday, Public Watchdogs’ attorneys made a 28-minute presentation to the United States Nuclear Regulatory Commission arguing for an immediate halt to the movement and burial of deadly radioactive nuclear waste next to the public beach at the failed San Onofre Nuclear Generating Station. In an abundance of caution, and a deep concern that the NRC may not publish the proceedings on its SONGS Cask Loading web... END_OF_DOCUMENT_TOKEN_TO_BE_REPLACED

On Christmas Eve, 2019, the California Public Utilities Commission formally refused to approve a $400 million-plus funding request from Southern California Edison, the owners of the failed San Onofre Nuclear Generating Station (SONGS). The Commission action will delay SONGS funding for at least 120 days, and was issued on the same day that Public Watchdogs filed a form Advice Letter protest with the Commission. “It is our hope that the Public Utilities Commission will review SCE’s profligate spending requests in full and open public hearings,” said Charles Langley, the Public Watchdogs executive director. “The public has a right to know how the public’s money is being spent.” END_OF_DOCUMENT_TOKEN_TO_BE_REPLACED