Editor’s Note: This story was written by Public Watchdogs’ member, Diane Ray, and originally appeared on the Beyond Nuclear Web site.

On August 9, 2018, standing tall and looking the part of the hero, David Fritch stepped up to the lectern at a Community Engagement Panel meeting between the owner of a now shuttered nuclear power plant and local residents concerned about the beachfront disposal of nuclear waste.  “I may not have a job tomorrow,” he began, “But that’s fine. I made a promise to my daughter.”

Fritch introduced himself as an experienced nuclear power plant safety worker, sent around the country to oversee safety at various sites. He then reported what the Nuclear Regulatory Commission (NRC) called a “near miss” incident at the radioactive waste storage facility of the local nuclear power plant.

On August 3, 2018,  a 100,000 pound thin-wall cask filled with deadly irradiated nuclear fuel got caught on a flange while being lowered into the steel-lined concrete vault of  the waste storage site, known as an ISFSI (independent spent fuel storage installation). The cask got stuck on a ¼” guide ring for about an hour over an 18-foot drop.

It was “a bad day” at a place where close to 3.6 million pounds of high level irradiated commercial nuclear fuel are being rushed into the sands of a fragile bluff, one and a half feet above the mean high tide, 108 feet from the sea, near an active earthquake fault, in a tsunami inundation zone, behind an inadequate sea wall.

It was another “bad day” at the long troubled and now closed San Onofre Nuclear Generating Station (SONGS) and its radioactive waste burial site on San Onofre State Beach, the iconic birthplace of California surf culture.

Coastal scientist and engineer, Rick Wilson of the Surfrider Foundation called it the worst waste site possible. Charles Langley, Director of Public Watchdogs and co-author of Radiological  Regulatory Failure, called it insane:  “Due to the danger from corrosion,” said Langley,  “you never put nuclear waste next to salt and water.”

Fritch explained to a stunned audience that the two-man loading team handling the incident did not know that this was the second serious cask loading incident. “Public safety should be first and it is not,” Fritch said. “Behind the gate, it is not.”

Mandated by the NRC to report a nuclear incident in writing within an hour, Southern California Edison waited 42 days to issue their report, having informed the NRC three days after the incident via a “courtesy phone call.”  Forced to issue a response, the NRC subsequently concurred with Fritch’s account, admitting to the possibility of: “a load drop event,…[in which the cask] could have fallen 18 feet into the storage vault if it had slipped off the inner ring assembly.”

How serious would the potential outcome have been had that nuclear waste cask fallen? Tom English, environmental engineer and former Presidential nuclear waste policy advisor, and local colleagues at UCSD and at the Samuel Lawrence Foundation, concluded that a cask could have “hit the concrete floor with the explosive energy larger than two sticks of dynamite.” They noted that based on the NRC’s own analysis of a similar dropped cask of slightly different dimensions, there was a 28 percent chance following a drop event that local residents would have needed to evacuate.

How can such a rate be acceptable in a highly populated area, they wondered? In a failure scenario caused by a steep drop of a cask, the air ducts could be damaged: “Water,” warned English, “would have to pour into the hole to cool the reaction and prevent or control a meltdown….As at Fukushima…the enveloping water would instantly become radioactive steam and require the evacuation of millions of people.”

Who would coordinate evacuation? Not the Marines standing guard across the freeway from SONGS nor any part of the federal government, which has opted out of any emergency or evacuation planning now that the nuclear plant is closed. Not by the state of California which has not come through with any comprehensive plan.

Safety Inspector David Fritch, now no longer working in the nuclear industry, said at a public meeting that “public safety should be first and it is not.”   Photo: From video: Whistleblower Reports Danger at San Onofre

But even if there were government plans in place, nuclear emergency plans on paper are unlikely to be workable in real life. A serious accident could compromise the abutting rail line and freeway, the adjacent Marine Corps Base Camp Pendleton, the Pacific Ocean, vast treasures of land and wildlife, and a state that is ranked as the world’s fifth largest economy.

By the end of 2019, Edison plans to house 73 radioactive waste casks on the shoreline site. Along with an older ISFSI on site housing 51 thin-wall casks about 100 feet further up the beach, SONGS will become the largest commercial irradiated fuel burial site in the nation. Each thin-wall cask weighs about 100,000 pounds, bolted shut and loaded with pez like pellets of uranium. “The amount of radioactive isotope, cesium 137, contained within each cask is equivalent to one Chernobyl accident worth of escaped radiation in the event of a through leak into the atmosphere,”  English told me. 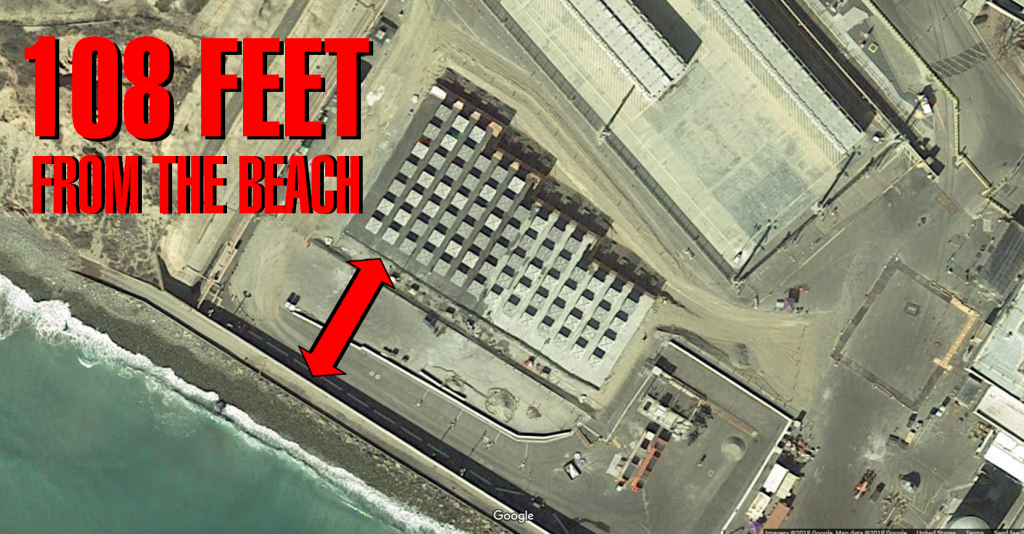 Fritch’s allegation of an earlier cover-up of a loading event at the ISFSI  was verified by Nina Babiarz of Public Watchdogs in a sworn affidavit, and confirmed by the NRC in a Webinar on November 8, 2018, according to Langley.

In the Ripley’s Believe It Or Not of the story, there was yet another near-miss at the ISFSI.  Edison disclosed at a Community Engagement Meeting on March 21, 2018 that a four-inch bolt, used to secure a shim needed to circulate cooling helium within the nuclear waste cask, had fallen off, discovered right before the cask was to be filled and buried. Loading had been halted for 10 days but was once more underway.

Local nuclear safety advocates were horrified. What about the first four casks of the same model, already in the vault? Did they share the flaw, which could lead to overheating of the irradiated waste? The NRC declared it had made its inspection and found everything in order. However, no technology presently exists to inspect the interior of this model of thin-wall cask entombed in concrete.

Why would anyone rush to bury high-level radioactive waste on a state beach with high seismic and corrosion risks? In the opinion of Langley, there are two reasons: First, that Edison chose the old footprint of SONGS former Unit I to sidestep superfund cleanup costs and accelerate NRC approval (claiming the NRC suggested the beachfront site); Second, by dumping the waste onto public land, Edison sprints to the finish line, potentially also dumping liability for any future nuclear accident in a legal maneuver called “bona vacantia,” or legally ownerless. Public land equals public liability.

Fritch has since left the nuclear industry. SONGS’ Chief Nuclear Officer responsible for managing the ISFSI, Tom Palmisano, has stepped down. The NRC writes that it suspects that all thin-wall casks “in the storage vaults may have had metal to metal contact” between the cask being lowered and the storage vault. There is only ½” of clearance between the cask walls and the vault lining. The NRC acknowledged: The thin-wall casks “ tend to bump against the shelf while being loaded into the vault…”.

This raises the probability that all 29 thin-wall casks in the vault sustained damage to their exteriors, potentially accelerating cracking and leaking. At the time of the near drop incident last August, a 30th filled cask turned up locked in limbo, unable to be returned to the spent fuel pool or to be buried in the damaged vault. It remains stranded in a building, stored within a transfer cask. However, transfer casks are not intended to provide an indefinite radiation barrier for thin-wall casks but are only approved by the NRC for brief usage, protecting workers during transfer operations.

Neither Edison, the subcontractor, Holtec, nor the NRC will release information about how they can maintain a safe temperature for the stranded cask. The NRC states only that the cask is being kept sufficiently cool. Nuclear safety advocates are not reassured, particularly since the NRC is leaving it up to Edison as to whether they choose to resume loading operations into the clearly defective model of vault, the Holtec Hi-Storm UMAX.

Safety advocates consider this example, as well as the NRC’s pervasive pattern of lax oversight in all the near miss incidents cited in this article, as the very definition of a “captured agency,” a proverbial fox minding a hen house. Donna Gilmore, Director of San Onofre Safety and frequent intercessor with the NRC, concludes: “Congress and the President should mandate the NRC enforce safety standards…and force the NRC to stop misleading them about the safety of systems they approve.”

Public Watchdogs and San Onofre Safety advocate for immediate closure of the beachfront ISFSI.  They propose loading the irradiated fuel into thick-wall casks that are 10 to 19.75 inches thick and stored in hardened buildings. This variant of cask, most commonly used around the world and which withstood the earthquake and tsunami at Fukushima, can be inspected and repaired to prevent leaks and explosions. These two groups then propose moving the sturdier casks across the freeway onto higher and drier ground at Camp Pendleton.  Bonus: the marines stand guard.

Nuclear safety advocates recognize, however, that the plan suggested above is a “least worst” option, by no means 100% safe. At San Onofre, as elsewhere, the problem of safely, securely, and permanently storing high-level radioactive waste is yet to be solved. Without vigilant citizen oversight and advocacy, in the hands of the nuclear industry, the “least worst” option will never be achieved.

“For nuclear disaster at San Onofre,” concludes Langley, “you don’t even need an earthquake or a tsunami, you just need the nuclear industry.” And its lapdog regulator, too.

The Coastal Commission’s strangely-worded “Restrictions” on nuclear waste could have created a legal loophole that would have allowed San Onofre to accept nuclear waste from other nuclear power plants! NINA BABIARZ’ PUBLIC COMMENTS at the 10-13-2022 CA COASTAL COMMISSION MEETING My name is Nina Babiarz, a founding Board Member with Public Watchdogs and a member of Congressman Levin’s San Onofre Task Force for approximately 3 years. ... END_OF_DOCUMENT_TOKEN_TO_BE_REPLACED

In early October of 2022, Public Watchdogs’ Director of Development noticed something peculiar about what should have been a very straight-forwarded licensing deal with Southern California Edison, the majority owners of the failed San Onofre Nuclear Generating Station (SONGS).  What Nina noticed, buried deep within all the  bureaucratic double-talk in the Commission Agenda, was a clause that would have given Edison permission to bury waste from... END_OF_DOCUMENT_TOKEN_TO_BE_REPLACED