According to the Oil Price Information Service’s “Gasbuddy,” San Diego gasoline prices are $5.54 a gallon for regular unleaded, as of 4:00 PM today.  That’s an increase of 5¢ per gallon in fewer than five hours, when we checked the site at noon today.

According to the oil industry, there are two factors at play in this “perfect storm” of price increases. The first factor is that this is the time of year when California gasoline refineries are forced to shut down to convert their production to a pollution-fighting summer blend.  The second reason is that the USA gets almost 8% of its oil from Russia, which has created a global pricing panic.

Do these claims makes sense?  Not when you look at the facts.


Public Watchdogs is of the opinion that the U.S. oil industry is engaging in opportunistic price gouging.  In more than 18 years of tracking gasoline and oil prices, we have never seen prices increase this aggressively.  What’s more, we see an illogical disconnect between market realities and what the industry is claiming.

Sorry, but the real life retail markets don’t work that way.  It takes 60 to 90 days to import oil from Saudi Arabia, or the mouth of the Volga River, then transport it to a U.S. refinery where it could take another 30 to 60 days to turn it into fuel.

Ridiculous Excuse #2:  “Oil prices went up yesterday , so your gas prices will go up tomorrow.”

If this claim was accurate, then the inverse would be true and the street price of gasoline would drop faster than a box of hot rocks every time oil prices declined.  Have you ever seen immediate retail price cutting when oil prices drop suddenly?  It never happens. In fact, gasoline prices are what economists call “sticky,” meaning that they go up, and stay up.

However, there is a cure for “sticky” high prices.  That cure is called “competition,” and in California, we don’t have it.

Ridiculous Excuse #3: “We use ‘LIFO’ Pricing”

LIFO pricing (see chart below) is an initialism for “Last In, First Out,” which means that the “last barrel of oil into a refinery” sets the price for the barrels coming out the other end as gasoline and other refined products.  For example, if a refinery is making gasoline out of West Texas crude oil that cost $90 a barrel when it was purchased in February (get price table), it is now charging $125 a barrel to you because that is the cost of West Texas Intermediary today. 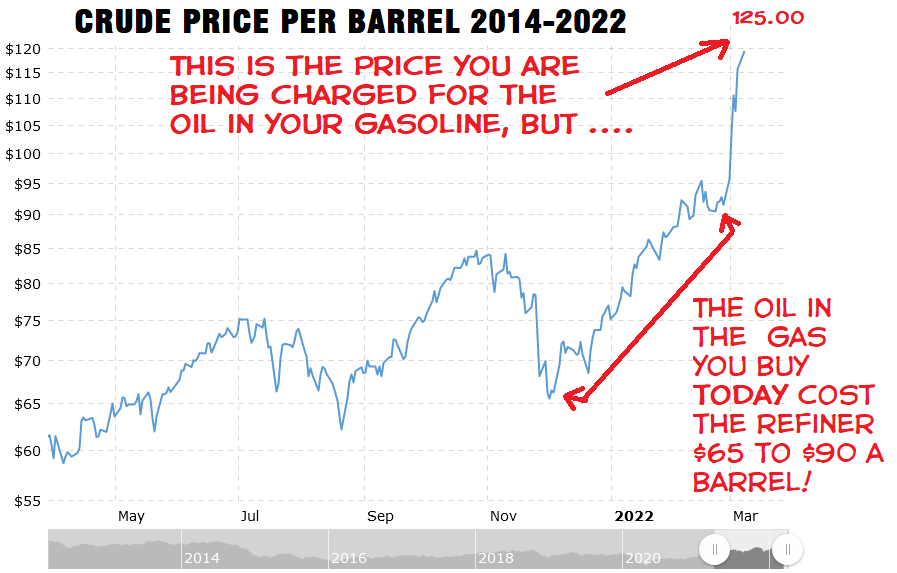 Ridiculous Excuse #4: “Its all taxes from our greedy State government”

Okay, they may have a point there, especially when prices get this high and some of the taxes are priced as a percentage, but when prices are “normal” the taxes are fairly reasonable considering that California has almost 15 million registered vehicles (more than any other state), and almost 400,000 miles of roads, with more drivers per mile of road than any other state.

Gasoline taxes pay to maintain the roads that make it possible to drive almost anywhere in California.  In other words, taxes are the oil industry’s best friend, because without them, we would not have any drive-able roads except for toll roads.

Ridiculous Excuse #6: “The price of oil is so high that gas prices must break records!”

Something is terribly wrong, and the California Attorney general should investigate.

At this time, there is global natural gas shortage due to harsh winters, the Ukraine crisis, and increased demand. However, the current prices hikes for customers of Southern California Gas, SDG&E,  and ultimately, Sempra Energy, may be completely unjustified and should command the attention of energy regulators. So far, SDG&E has claimed that it is unlawful for them to make a profit on natural gas sales... END_OF_DOCUMENT_TOKEN_TO_BE_REPLACED

QUESTION:         Why are Compressed Natural Gas Prices SO high? ANSWER:       The utility companies claim: elongated cold weather spell brought with the rain CNG reserves low due to national temperature spikes Short commodity purchasing period   QUESTION:         What can consumers do to decrease their bills? ANSWER:            Consumers can: Turn down the thermostat Put on a sweater Fill any leaks that allow cold air to come inside... END_OF_DOCUMENT_TOKEN_TO_BE_REPLACED