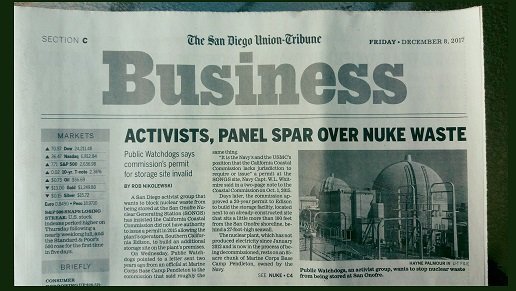 This story is reproduced under the Fair Use provision of U.S. copyright law. Please get the original story as it appeared in the San Diego Union Tribune here.

A San Diego activist group that wants to block nuclear waste from being stored at the San Onofre Nuclear Generating Station (SONGS) has insisted the California Coastal Commission did not have authority to issue a permit in 2015 allowing the plant’s operators, Southern California Edison, to build an additional storage site on the plant’s premises.

On Wednesday, Public Watchdogspointed to a letter sent two years ago from an official at Marine Corps Base Camp Pendleton to the commission that said roughly the same thing.

“It is the Navy’s and the USMC’s position that the California Coastal Commission lacks jurisdiction to require or issue” a permit at the SONGS site, Navy Capt. W.L. Whitmire said in a two-page note to the Coastal Commission on Oct. 1, 2015.

Days later, the commission approved a 20-year permit to Edison to build the storage facility, located next to an already-constructed site that sits a little more than 100 feet from the San Onofre shoreline, behind a 27-foot-high seawall.

The nuclear plant, which has not produced electricity since January 2012 and is now in the process of being decommissioned, rests on an 85-acre chunk of Marine Corps Base Camp Pendleton, owned by the Navy.

Charles Langley, the executive director at Public Watchdogs, said the letter is significant but a spokeswoman for the Coastal Commission said it is not.

Langley said the Coastal Commission permit is invalid. “It’s almost as if the Girl Scouts of Southern California decided to issue a permit for nuclear waste,” Langley said.

But Coastal Commission public information officer Noaki Schwartz said the commission’s approval of the permit adds extra layers of oversight at SONGS, where 3.55 million pounds of nuclear waste is stored between the Pacific Ocean and Interstate 5.

“We disagree with the Navy’s position, but even if they’re right that means the waste gets to stay there without any oversight by the state of California,” Schwartz said. “Unfortunately, if the Navy is correct, this doesn’t mean the storage facility would not be built but that it would be built without any environmental conditions by the Coastal Commission, such as the 20 year permit limit and sea level rise analysis.”

The letter was included in a cache of documents the Coastal Commission sent to commissioners and parties involved prior to the October 2015 vote that approved the permit.

In the letter, Whitmire argued SONGS is located on federal land and the Coastal Commission — a state entity — did not have authority to issue a permit. A spokesman for Marine Corps Installations West-Marine Corps Base Camp Pendleton, in an email Thursday, reiterated that position.

In 1964, an easement was issued by the Department of the Navy to Southern California Edison and San Diego Gas & Electric to construct SONGS.

Asked if the Navy/USMC opposed construction of the storage facility at SONGS, the spokesman said officials at Camp Pendleton support operations “that comply with all licenses, permits and other requirements” of the U.S. Nuclear Regulatory Commission (NRC) as well as other federal and state regulatory agencies.

The NRC is in charge of reactor safety and disposal of spent fuel for the nation’s nuclear facilities and has approved the storage setup at SONGS.

Edison officials have said they expect this month to start transferring waste currently in “wet storage” pools into casks in “dry storage” at the new storage installation. By 2019 the transfer from “wet” to “dry” will be complete.

A spokeswoman for Edison declined to comment on Wednesday’s news release, citing the pending litigation filed by Public Watchdogs.

Public Watchdogs attorney Cory Briggs filed a lawsuit in U.S. District Court last month, arguing the statute that allowed the military to see SONGS get built does not extend to constructing storage facilities once the plant is offline.

Nuclear waste is piling up not only at SONGS but at nuclear plants across the country because the federal government has not opened a repository to put the nearly 80,000 metric tons of spent fuel that has accumulated at various reactor sties.

Funding for the Yucca Mountain repository in Nevada was cut off by the Obama administration. There has been discussion on Capitol Hill to resurrect Yucca Mountain, as well as exploring construction of what is called “interim storage facilities” in remote locations in West Texas and southeastern New Mexico.

The Public Watchdogs lawsuit is not to be confused with another suit that was recently settled out of court.

In August, the East County-based civic group Citizens’ Oversight, along with a consumer activist from Escondido, reached an agreement with Edison in that, among other things, calls on Edison to make “commercially reasonable” efforts to relocate the SONGS waste to another facility.

One of the sites mentioned is the Palo Verde Nuclear Generating Station in Arizona, located about 50 miles from Phoenix.

The Coastal Commission’s strangely-worded “Restrictions” on nuclear waste could have created a legal loophole that would have allowed San Onofre to accept nuclear waste from other nuclear power plants! NINA BABIARZ’ PUBLIC COMMENTS at the 10-13-2022 CA COASTAL COMMISSION MEETING My name is Nina Babiarz, a founding Board Member with Public Watchdogs and a member of Congressman Levin’s San Onofre Task Force for approximately 3 years. ... END_OF_DOCUMENT_TOKEN_TO_BE_REPLACED

In early October of 2022, Public Watchdogs’ Director of Development noticed something peculiar about what should have been a very straight-forwarded licensing deal with Southern California Edison, the majority owners of the failed San Onofre Nuclear Generating Station (SONGS).  What Nina noticed, buried deep within all the  bureaucratic double-talk in the Commission Agenda, was a clause that would have given Edison permission to bury waste from... END_OF_DOCUMENT_TOKEN_TO_BE_REPLACED