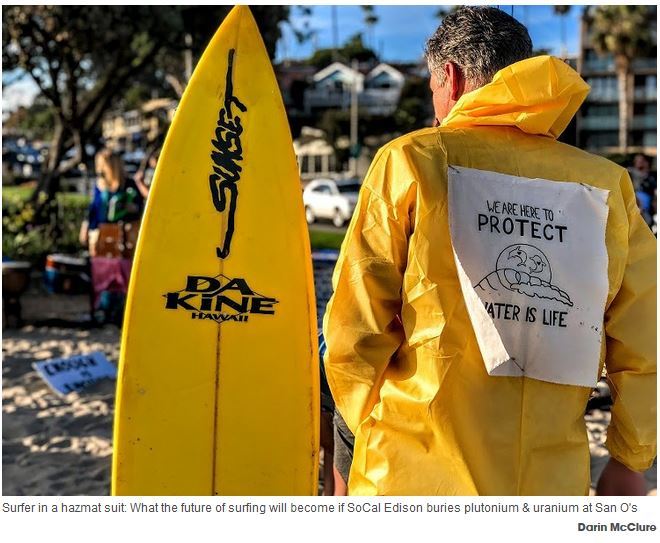 Nearly 80 people gathered in Laguna Beach on Saturday to protest Southern California Edison’s (SCE) plan to bury 3.6 million pounds of nuclear waste at San Onofre State Beach in San Clemente. According to Public Watchdogs, SCE has supposedly obtained a permit from the California Coastal Commission that not only authorizes them to bury the deadly waste, but also permits them to store it in thin-walled canisters 20-feet below the surface and 108-feet from the high tide mark. SCE is expected to dump the waste in mid-December.

This is a big problem for many reasons. The plutonium that’s planned go inside the cans is lethal to all life (humans, animals, plants, etc.) for 250,000 years. The uranium waste is estimated to be deadly for up to a million years. But the cans—which can hold up to 125,000 pounds of atomic waste— are only guaranteed to last between 10 – 25 years, according to the manufacturer’s warranty. Let that sink in for a second.

Additionally, the beachfront nuclear waste dump is located in a tsunami zone, on top of an earthquake fault line and inches above the Pacific Ocean’s corrosive salt water table. In other words, it’s likely that radioactive waste will leak into the ocean, and the surrounding ecosystems and communities in the event of a natural disaster.

“We believe a nuclear release at San Onofre is inevitable,” says Charles Langley, the executive director of Public Watchdogs.

“Each of the 72 thin-walled, stainless steel cans contain the radiation equivalent of all the radiation that was released during the Chernobyl disaster.”

The 1986 Chernobyl power plant explosion in the Ukraine is considered the worst nuclear disaster in the history of the world. For nearly 30 years, it was deemed uninhabitable due to high radiation levels. Japan’s Fukushima power plant is now detectable in the waters off our coastline, too. The ocean, needless to say, isn’t in the best condition.

According to Langley, the coast of Southern California will be devastated by toxicity in the event of a leak. Although he believes the government will redefine what “safe levels of radiation” are in order to down play a spill (Remember: you can’t clean up the ocean once it’s contaminated with nuclear waste), the ocean will essentially be uninhabitable to oceanic life and immensely dangerous for humans to swim in.

“A water-borne radiation leak is a global pollution event,” says Langley. “Our fear is that [one of the] cans might get a small hairline crack and reach criticality — a sustained nuclear reaction that would result in a meltdown. Each of the cans are lined up like a string of Chinese firecrackers on the beach. If a chain reaction occurred it would be a global nuclear disaster.”

Citizens Oversight, a nonprofit activist group, tried to reach a settlement out of court in August with SCE that would’ve required the waste be moved to a new, less vulnerable location. Instead of finding a new place for the nuclear waste, SCE accelerated the scheduled burial from next year to next month almost immediately after the settlement was announced. Activists objected to the settlement saying its terms only outline a vague commitment to seek an alternative site sometime before 2035 but does nothing to stop the impending burial at San Onofre.

Briggs Law Corporation filed its own lawsuit last Thursday on behalf of Public Watchdogs against the United States Department of Defense, the U.S. Navy, SCE, and San Diego Gas and Electric on the grounds that the defendants lack the legal authority to bury nuclear waste on the beach at San Onofre.

“We need thicker, safer casks than the thin-walled temporary storage devices that Edison is using,” says Langley. “A single pound of plutonium, which would be about the size of your thumb, is so poisonous that it can give cancer to every human being on Earth if it was evenly distributed. It is widely regarded as the most deadly stuff on earth.”

Given the ominous nature of a potential nuclear disaster in the future, Saturday’s protest at Main Beach was a powerful and positive event. Students from Laguna Beach High School, parents, coastal OC residents, indigenous peoples, musicians and artists all attended.

People held signs that read, “Find a better place for your toxic waste” and “Everything deserves a proper burial” while others signed the petition (which YOU can sign here).

“We must defend the things that can’t defend themselves,” a musician said to the group of protesters. “What we do to the earth is what we do to ourselves.”

This story was republished under the Fair Use Provision of U.S. Copyright law. Not a word has been changed. Get the original story here.

Today, Public Watchdogs announced that it has filed a 2.206 Petition with the U.S. Nuclear Regulatory Commission to compel Southern California Edison to provide an analysis of “non-credible” safety threats at the beachfront San Onofre Nuclear Waste Dump located at San Onofre State Beach Park in San Diego County. Get the 2.206 Petition Here. Get the press release Background: The Public Watchdogs petition argues that under... END_OF_DOCUMENT_TOKEN_TO_BE_REPLACED

By Roger Johnson, PhD, contributing editor  All nuclear power plants regularly discharge radioactivity into the environment.  They produce large quantities of radioactive materials and some of it gets discharged into the atmosphere, waterways, and surrounding land.  The public needs to know more about these radioactive emissions, especially since they are conducted frequently and in secret.  Ionizing radiation is a known carcinogen, and since cancer is becoming the number one... END_OF_DOCUMENT_TOKEN_TO_BE_REPLACED