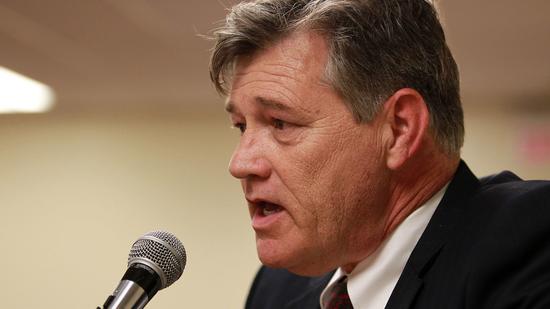 A San Diego nonprofit opposed to the latest plan to settle costs related to the San Onofre nuclear plant failure is seeking party status in the long-running proceeding before the California Public Utilities Commission, saying it is the only consumer group left fighting for ratepayers.

In its 11-page filing Wednesday, Public Watchdogs said other parties claiming to represent Southern California Edison and San Diego Gas & Electric customers may be more focused on getting paid if the settlement is approved than saving money for consumers.

“Intervention of Public Watchdogs is necessary at this stage of the proceeding to ensure that ratepayer interests are represented in evaluating the proposed settlement,” the application said.

The request, which will be decided by utility regulators, comes a month after plant owners Edison and SDG&E and a host of consumer groups announced a change to an earlier settlement adopted by the commission in 2014.

The 2014 agreement assigned $3.3 billion of the $4.7 billion in premature shutdown costs to ratepayers rather than utility shareholders. The proposed change announced in January as a settlement to a federal lawsuit would shave $775 million from customers’ share of those charges.

But Charles Langley of Public Watchdogs said consumer attorneys were motivated by money to agree to a new deal — especially the Aguirre & Severson law firm that filed the federal case and would receive more than $5 million in fees.

“The attorneys in this case have stabbed the public in the back in exchange for a $5.4 million payday, and the other participants are also lining up at the trough for easy money at the public’s expense,” Langley said in a statement.

The utilities maintained for years that the 2014 settlement was fair to all sides. The consumer groups that negotiated the January settlement said it was the best deal they could reach.

Just north of Oceanside, the San Onofre Nuclear Generating Station closed in 2012 after newly installed replacement steam generators leaked. Public Watchdogs said ratepayers should not have to pay billions of dollars for a plant failure they did not cause.

Public Watchdogs is a California nonprofit organized in 2016. The organization’s mission is to investigate, expose, advocate and serve as a catalyst for reforming unaccountable government agencies, according to its website.

This story was republished under the Fair Use Provision of U.S. Copyright law. Not a word has been changed. Get the original story here.  Get a copy of Public Watchdogs Motion for Party Status here.

Public Watchdogs, a nonprofit advocacy group, is expressing deep concern for the public’s safety regarding the 3.6 Million pounds of deadly radioactive nuclear waste stored on the beach, 108 feet from the Pacific Ocean, in a USGS designated tsunami inundation zone. END_OF_DOCUMENT_TOKEN_TO_BE_REPLACED

For Immediate Release Public Watchdogs learned today that the Supreme Court of the United States has denied our petition for a hearing regarding the right of private citizens to sue utilities over safety issues involving toxic high-level nuclear waste.   At issue is the storage of highly radioactive “spent” nuclear fuel.  3.6 million pounds of this  fuel, which is deadly once it is “used up” or “spent,”... END_OF_DOCUMENT_TOKEN_TO_BE_REPLACED