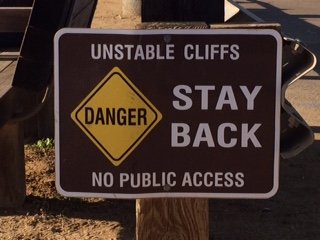 In January, San Diego was hit hard with winter storms, funnel clouds, tornado warnings, King Tides and the sudden collapse of Sunset Cliffs. I just couldn’t help but wonder what had happened up at San Onofre State Beach Park, so one day on my way back from meetings in LA, I stopped to see for myself.

Having lived in Laguna Beach and Dana Point, I was intimately familiar with the nooks and crannies of this coastal playground.  Imagine my surprise, when driving to the south end of the beach parking lot, my eyes met with barriers and the sudden realization that an entire section of the parking lot and also the beach were both gone! 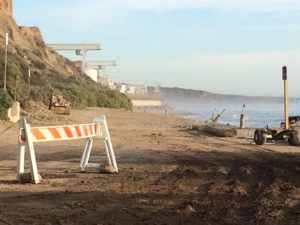 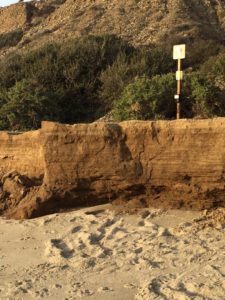 My surprise quickly turned to shock when I decided to explore and document the extent of the damage and discovered such a deep and drastic drop in the topography had occurred.  The signpost you see above is between 7 & 8 feet high and makes for a pretty accurate visual measurement tool against the fissure directly below it for scale & proportion. 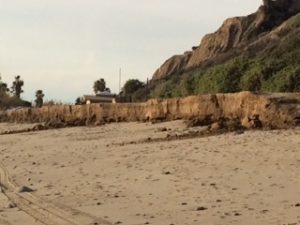 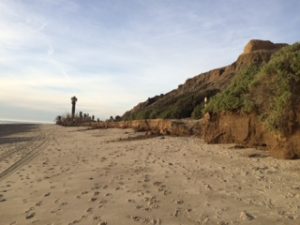 I then decided to walk off the distance of the damage and pinpoint markers on the cliffs so calculations could be determined of where the damage had occurred below in relation to the proposed location of the radioactive spent nuclear fuel burial site located immediately on the bluffs above.  And that’s exactly what Public Watchdogs did – see below:

The length and the breadth of what had vanished, what once had been a parking lot and turn around area for the surfers and beachcombers,  was simply astounding.  All the academic references to the geological fragility of these bluffs came to life for me in a moment of real time. 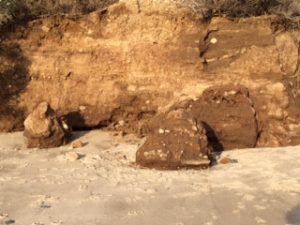 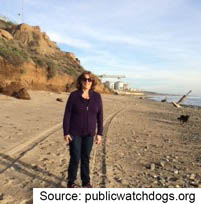 As I walked I also noticed there were also huge chunks that had toppled from the bluffs above.  I then went as close as allowable to see what damage could be assessed in proximity of the plant itself.  After all, Edison still has tons of hot, radioactive spent fuel rods cooling in the pools and in dry cask storage on that property. Take a look at just how close the damage came. 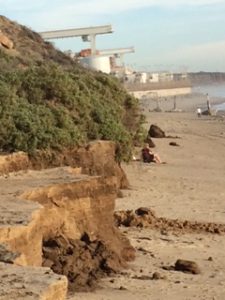 Our Nuclear Regulatory Commission (NRC) concluded when it granted Southern California Edison all ‘Off-site Emergency Planning Exemptions’ (i.e. Edison’s now exempt from all emergency planning anywhere in San Diego and Orange counties that is not on the SONGS site) that those exemptions, “will not present an undue risk to public health or safety, and are consistent with the common defense and security.”

REALLY? Well maybe they are highly educated engineers, but as my Mother used to say: ‘I don’t think they graduated from the College of Common Sense’. Are we really going to entrust the same engineers and/or the federal regulators, that designed and/or approved faulty steam generators which leaked radiation, threatened our communities and required an abrupt shut down, to make this call?

We should be demanding that our local, regional, state and federal ‘leaders’ step up, get their heads out of the sand, and conduct an objective risk assessment of this potential disaster waiting to happen like Del Mar has competed.

Why hasn’t Edison used some of the PUC ratepayer funded Decommissioning money to study this same issue in Oceanside before requesting a permit to bury radioactive nuclear waste on the bluff?*

* This is money that you have already paid in your electric bills!

Why are gas prices going up when the price of oil is going down? Get the  KUSI interview on this story  with Public Watchdogs’ Executive Director, Charles Langley   There is a schism in the scheme of things.  According to the “Laws of Supply and Demand,” the price of a commodity will increase when it is scarce, and decrease when it is abundant. As of this... END_OF_DOCUMENT_TOKEN_TO_BE_REPLACED

That metallic taste in your mouth?  It could be brain damage. People who surf  near the failed San Onofre Nuclear Generating Station (SONGS) are rumored to occasionally report a metallic taste in their mouth while surfing. Southern California Edison (SCE), the owners of the shuttered nuke plant, use a system called “Dilute and Discharge,” to dump radioactive water from its spent nuclear fuel pools into the... END_OF_DOCUMENT_TOKEN_TO_BE_REPLACED