On April 11, 2022, the Washington Post published this article, What should America do with its Nuclear Waste?

Public Watchdogs member, Diane Ray, responded with this letter to the editor:

On April 10, 2022, Jerry Stephenson, ISFSI engineer manager at the nuclear waste dump at San Onofre, was quoted in the Washington Post, saying that the dry fuel storage at San Onofre is entirely “self-sufficient” one hundred feet from the sea and just sits there “fat, dumb, and happy,” and also that given how safe everything there is: “We should put a little restaurant out there and serve drinks.”  Public Watchdogs member Diane Ray wrote this response:
Show the article’s featured photo of San Onofre’s beachfront nuclear waste dump to a fifth grade class and ask what they think could go wrong.  Would they bet money that the equivalent of 92 Chernobyl accidents of nuclear material sunk into a fragile bluff will remain:  “fat, dumb and happy,” in the words of one of the guy in charge, until it can be moved?   Explain that the nuclear waste is loaded  in thin wall canisters only ½” to 5/8” thick which cannot be inspected or repaired but are used throughout our country as compared to storage casks 10”-19” thick favored almost everywhere else, including Russia, that can be monitored and repaired and survived Fukushima. Ask them, given that:  A) The NRC colluded with industry to cover up the potentially deadly near miss load drop event discussed in the article (which we only know about because a safety worker stepped forward), and  B) Holtec, the contractor responsible for all of the above  is close to being given the green light to control much of America’s nuclear waste: What should America do about its nuclear regulators? 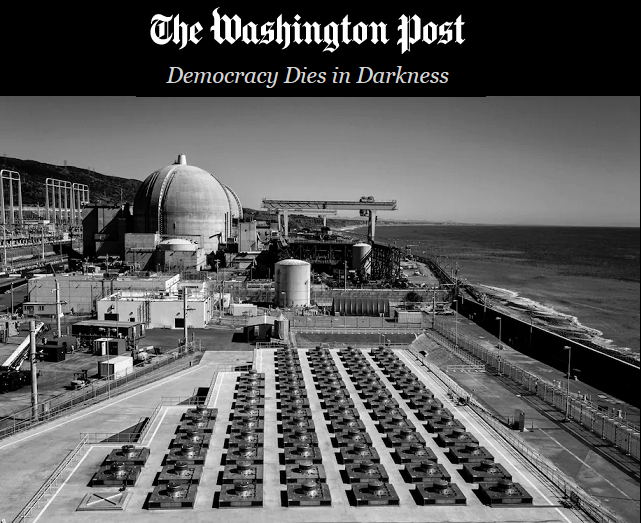 Former Chair of  U.S. Nuclear Regulatory Commission rejects nuclear energy as “not safe” and “not smart” Dateline May 12, 2022 —  E, the Environmental Magazine, has published a compelling article by journalist Sara Mosko titled the Insanity of Expanding Nuclear Energy.  The story explains how four of the world’s top nuclear regulators have issued a joint statement rejecting nuclear energy as a clean, green solution to... END_OF_DOCUMENT_TOKEN_TO_BE_REPLACED

Trained workers at the Pilgrim nuclear power plant in Massachusetts are claiming  that skilled nuclear technicians are being replaced by unqualified “Homer Simpsons” as a way of cutting labor costs for the plant’s new owner, Holtec International. Holtec’s legal record includes criminal activities such as bribery and outright lying to elected officials, so it is no surprise that the company has serious management problems that have... END_OF_DOCUMENT_TOKEN_TO_BE_REPLACED