Deployment of the new beach-front Nuclear Waste Dump at San Onofre is imminent. Here are four good reasons why storing high-level radioactive nuclear waste on our public beaches is a bad idea. See the photos below. 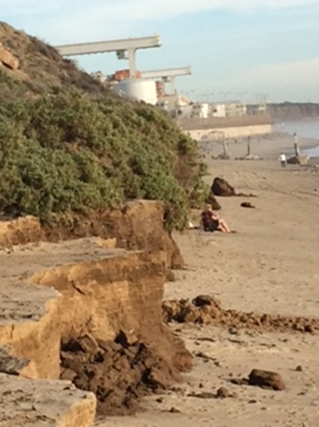 Southern California Edison is poised to turn San Onofre State Park into a beach-front nuclear waste dump in the next few weeks.

The waste will remain at the beach for hundreds, perhaps even thousands of years.

The California Coastal Commission Mission Statement reads:  “The Commission is committed to protecting and enhancing California’s coast and ocean for present and future generations.” Yet curiously, on  October 6, 2015,  the Commission voted to issue a permit allowing the storage of Spent Nuclear Fuel (SNF) on the beach at San Onofre in the “early 2016.”  Once the casks are buried, they are likely to remain on the beach for as few as two generations, and more probably for at least 160 years.

[1] For a copy of the Holtec Warranty, see http://ow.ly/YHUzY

[3] I need to document this authoritatively

Premise #1: The Commissioners were deceived by deceptively
worded “Special Conditions” that are actually
waivers of existing NRC Rules

The Coastal Commission’s Staff  Recommendation[1] urged immediate approval of  the Southern California Edison nuclear waste dump (called an IFSI) by imposing tough-sounding  special conditions that would ensure that the waste remains safe and transportable once a permanent storage site is found.  In reality, the tough “special conditions” actually allow SCE to defer its compliance to existing NRC rules.

Those special conditions were carefully worded to convey a false impression to casual readers —  and the Commissioners  — that each “special condition”  is in effect prior to burial of the waste on the beach.  The key Special Conditions are found on page 6 of the Staff Report under III SPECIAL CONDITIONS, “This permit is granted subject to the following special conditions:”  (emphasis added under section d.)

However, a careful reading of the Duration of Approval text reveals the most important safety measure (i.e. ensuring that the casks are transportable) isn’t enforced for twenty years when the temporary license for the San Onofre Nuclear Waste Dump is up for renewal.  The introductory paragraph states that Southern California Edison (the Permittee) is not required to observe any of the tough-sounding special conditions until April 6, 2036.

In other words, SCE has been granted a permit that does not require the containers to transportable now.  SCE has successfully managed to to kick the portability can down the road for another twenty years.

Nuclear Regulatory Commission (NRC) rules require that dry casks must be monitored by an Aging Management Plan (AMP).  The purpose of the AMP is to ensure  that canisters can be inspected for damages after they are buried.

But the facts are that SCE has no Aging Management Plan.  All it has is an “intended” AMP.  Nor does it know when it will have a plan. This summary appears page  13: (emphasis added)

In summary, SCE’s intended aging management program would include (a) the monitoring of environmental conditions, such as temperature and humidity, that could influence the risk of corrosion and degradation of the stainless steel MPCs; (b) visual observation, surface measurements, and other inspection techniques to provide information on the physical condition of the MPCs; and (c) use of an empty cask (“coupon”) as a surrogate for filled casks to allow for more thorough inspection and evaluation. However, the “non-destructive examination techniques”, “remote surface inspection tools” and “NDE methods, employment methods, qualification processes and acceptance criteria” referenced by SCE are “in development”, and their utility for the maintenance and monitoring of the spent fuel casks has not been demonstrated. Nor is it clear when these techniques, tools and standards would become available for use at SONGS.

The bottom line is that SCE’s only guarantee is a vague promise that an AMP is “ in development. ”  What’s more, this “development” of inspection capability could take another 20 years.

Premise #3:   The Permit endorses the delay of an NRC-required
“Maintenance and Monitoring System”

Again, the Coastal Commission created a tough-sounding requirement for SCE that may actually serve to delay SCE’s compliance with NRC rules.
Namely, SCE must prove that is has the ability to maintain and monitor the canisters once they are buried.
Most importantly, the Coastal Commission Staff has allowed SCE to get a permit based on  a monitoring system that has yet to be invented.  Specifically, examination of the Holtect canisters requires an “NDE” or non-destructive examination.

At this time SCE has not invented a way to accomplish a non-destructive examination of its canisters.

From Page 13 of the attached:  (emphasis added)

Maintenance & Monitoring
The NRC requires licensees to implement an Aging Management Plan (AMP) to provide for the continued safe dry cask storage of spent fuel in order to renew the initial 20-year license for the HI-STORM UMAX ISFSI. SCE has indicated that it will develop its aging management program shortly after the fuel is transferred to the proposed ISFSI, in advance of NRC requirements. In a 9/14/2015 document submitted to Commission staff (SCE 2015f), SCE described this program as follows:

SCE’s program will focus on engineered controls (i.e., conservative design, material selection and fabrication controls), operational controls (e.g., inspection and monitoring) and developing mitigation plans to address material degradation and/or mitigate its consequences. Site monitoring of environmental parameters such as temperature and humidity will be used to help determine the risk of corrosion to the canister and predict the time of onset of degradation. Inspections will include visual observation, collection of surface deposits and temperature, and more extensive non-destructive examination (NDE) techniques. Industry efforts are well underway to develop NDE methods, deployment methods, qualification processes and acceptance criteria. It is not unusual for such efforts to evolve over time and with greater collective experience. With the commitment that SCE will not wait until it is required by the NRC to implement an AMP, SCE expects to be an early, if not the first, user of such techniques.

One of the challenges of inspections is getting to the entire surface of the loaded canisters which have a radiation environment that limits access. Remote surface inspection tools are currently being developed and are expected to be available for use at SONGS shortly after the fuel is transferred to the expanded ISFSI. In addition to developing these remote inspection tools, SCE will place an empty canister in the same environment as the loaded systems. This type-test specimen (i.e., coupon) can be thoroughly inspected and monitored in ways that a loaded canister cannot due to the presence of a spent fuel assembly. SCE has selected a canister to test, which will be located in the vicinity of the proposed ISFSI pad and will begin its initial exposure by the fourth quarter of 2015. SCE’s AMP will include a combination of the inspections described above to monitor the condition of the ISFSI components throughout their service life. This will provide assurance that the ISFSI components are performing as designed and allow for the spent fuel to be safely removed when the DOE is ready to transfer the fuel to an interim storage facility or permanent repository.

Plain English translation:  SCE has no method for examining whether or not its canisters have been damaged by earthquakes, wave action, corrosion, or radioactive decay because the techniques to do so have not been invented yet.

Second,  SCE will deploy an empty surrogate canister called a “coupon” that it can examine in place of the fully-loaded buried canisters.  But comparing the stress on an empty canister versus a full canister is a ridiculous form of quality control.  According to the Storage and Transport Cask Data report[1], a Holtec canister filled with spent nuclear fuel can weigh between 287,000 and 480,000 pounds.  Therefore, comparing the possibility of a stress fracture by using an empty cask is specious.

Premise #5:   Holtec’s CEO admitted on video that if a
cask develops a microscopic leak it can’t
be repaired

As noted on page 3 of this document,  Holtec, the manufacturer of the canisters has admitted that the casks  are 100% non-repairable in the event of a microscopic crack which could leak “millions of curies” [1]of deadly radiation.

Of course SCE won’t know if there is microscopic cracking because it doesn’t have an Aging Management Plan in compliance with NRC rules!   This is what Dr. Kris Singh, Holtec CEO said at a Community  Engagement panel meeting (see video, page 3 of this document).

“In my personal belief it is not practical to repair a canister if it were damaged …  if a canister were to develop a leak, let’s  be realistic: You have to find it, the crack, where it might be,  and then find the means to  repair it. You will have, in the face  of millions of curies of radiation that is coming out of the canister …  all it takes is a microscopic crack …”

A single curie = 3.70 x 10^10 disintegrations per sec. In today’s units 1 curie is about 30 Giga Becquerels, a death dealing dose of radiation.

At this time, there is global natural gas shortage due to harsh winters, the Ukraine crisis, and increased demand. However, the current prices hikes for customers of Southern California Gas, SDG&E,  and ultimately, Sempra Energy, may be completely unjustified and should command the attention of energy regulators. So far, SDG&E has claimed that it is unlawful for them to make a profit on natural gas sales... END_OF_DOCUMENT_TOKEN_TO_BE_REPLACED

QUESTION:         Why are Compressed Natural Gas Prices SO high? ANSWER:       The utility companies claim: elongated cold weather spell brought with the rain CNG reserves low due to national temperature spikes Short commodity purchasing period   QUESTION:         What can consumers do to decrease their bills? ANSWER:            Consumers can: Turn down the thermostat Put on a sweater Fill any leaks that allow cold air to come inside... END_OF_DOCUMENT_TOKEN_TO_BE_REPLACED