This story is reproduced by Public Watchdogs under the fair use provision of U.S. Copyright law.
Please read the original story at the San Diego Union Tribune here. 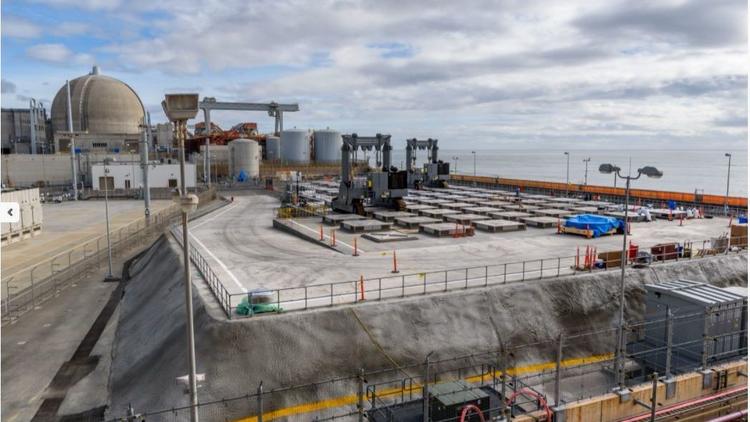 The site of the dry cask storage facility that holds the spent nuclear fuel at the San Onofre Nuclear Generating Station. (Photo by Southern California Edison).

Four years after approving a plan that charged ratepayers billions of dollars for the premature closing of the San Onofre nuclear plant, state utility regulators adopted a new deal Thursday that trims about $750 million from consumers’ electricity bills.

By unanimous vote, the California Public Utilities Commission agreed to a new cost-sharing settlement that halts payments by utility customers for the failed power plant as of December 2017.

The decision means that consumers would stop paying the $3.3 billion in San Onofre-related charges imposed on them after a radiation leak shut down the nuclear plant north of Oceanside in 2012.

Under the plan approved by regulators in 2014, those charges were scheduled to persist until 2022.

The agreement would save more than 6 million homes and businesses an average of about $120 over four years. Ratepayers also could see an actual rebate — most likely reflected as a credit on their bills — for closure costs they paid since December, when the revised settlement was agreed to in principle.

“This is a marked improvement from the 2014 decision,” CPUC president Michael Pickersaid just before the vote.

The new arrangement was negotiated by plant owners Southern California Edison and San Diego Gas & Electric after the San Diego area consumer group Citizens Oversight sued Edison and the commission over the 2014 deal.

“It’s not a 100 percent victory, but it does mean no more bleeding after December 2017,” said attorney Michael Aguirre, who represented Citizens Oversight in the litigation.

The commission made one change to the proposed decision — eliminating a $25 million, stand-alone greenhouse gas research program to be administered by the Cal State University system and funded by utility shareholders.

While the program’s goals may be laudable, Picker said, “I don’t think it’s appropriate for us” to approve.

Parties involved in the case have 10 days to let the CPUC know if they agree with the deletion.

Background on the case

The federal lawsuit that led to the $750 million in savings accused the utilities commission of authorizing an illegal taking of property — consumers’ cash by way of higher electricity bills — because customers were being charged for a power plant that produced no electricity.

The suit was dismissed by U.S. District Court Judge Cathy Ann Bencivengo in 2015, but the 9th U.S. Circuit Court of Appeals later agreed to hear the case.

Within weeks of that decision, lawyers for Edison and SDG&E initiated settlement discussions that led to an agreement announced early this year between the utilities and each party in the San Onofre case pending before the utilities commission.

But Picker and other commissioners were not immediately swayed that the agreement was worthwhile.

In February, they agreed to allow the San Diego advocacy group Public Watchdogs into the proceeding on a limited basis. Public Watchdogs opposed the settlement because it allowed the utilities to retain most of what the group said were illegal gains and because it granted Aguirre and his law partner some $5.4 million in attorney fees.

“Sure, the settlement claims to return ($750 million) to ratepayers but the total cost of the failure (at SONGS) is $5.5 billion and 40 percent of that cost is being borne by the public,” Public Watchdogs executive director Charles Langley said during the public comment period at Thursday’s CPUC meeting in Sacramento.

Backers of the settlement approved Thursday say it is a notable improvement from the deal approved in 2014, when regulators assigned the lion’s share of San Onofre costs to utility customers rather than Edison and SDG&E shareholders.

The $3.3 billion costs to consumers equaled 70 percent of the $4.7 billion expense. The $750 million savings ratepayers will now see is nearly 25 percent of the 2014 cost to utility customers.

As part of the new settlement, a team of six nuclear energy experts has been assembled to work with Southern California Edison to try to find a way to move the 3.55 million pounds of nuclear waste at SONGS to another location.

The team includes a former chairman of the Nuclear Regulatory Commission, the independent agency in charge of all safety-related matters surrounding nuclear energy in the U.S., and a former director of policy at the U.S. Department of Energy.

A complicated and controversial 2014 deal

The 2014 deal was negotiated privately between utility executives and two consumer groups, The Utility Reform Network of San Francisco and the Office of Ratepayer Advocates, an independent unit of the utilities commission.

The proposed settlement was announced in March 2014 but amended that September to include a provision requiring utility shareholders to contribute $25 million toward an unspecified greenhouse-gas research program within the University of California (which was later changed to be run by the Cal State University system).

About the same time, then-Attorney General Kamala Harris opened a criminal investigation into the utilities commission based on emails between utility regulators and executives that surfaced in an unrelated lawsuit.

Those exchanges showed that commissioners were routinely meeting privately with companies they oversaw to discuss matters that were pending before the commission.

When investigators searched the Los Angeles area home of longtime commission president Michael Peevey in 2015, they found two pages of handwritten notes that appeared to show an agreement to resolve the San Onofre costs between ratepayers and utility shareholders.

After the Union-Tribune disclosed the finding, Edison filed notice of an ex parte meeting — conversations not in a public forum — it had with Peevey nearly two years earlier at a hotel in Warsaw, Poland.

The company said it had previously thought the meeting didn’t need to be reported, even though the deal points listed on the notes closely resembled the terms approved by Peevey and other commissioners at their public meeting in November 2014.

The $25 million in greenhouse-gas emissions research funding became a key element of the criminal investigation because the funding appeared on the Warsaw notes sketched out in 2013 but were not added to the settlement terms released publicly until September 2014.

Meanwhile, emails obtained by the Union-Tribune showed Peevey discussing the funding with UCLA researchers nearly a year before then-commissioner Michel Florio proposed adding the money to the San Onofre settlement as a way to improve the deal for consumers.

Despite the meeting in Warsaw and numerous disclosures indicating that the San Onofre costs were negotiated in private rather than through the public process, regulators took no steps to alter the terms of the deal they approved in 2014— until Thursday.

The four-year Attorney General’s Office investigation into utilities commission practices similarly sputtered and no criminal charges have been filed.

Yesterday, Public Watchdogs’ attorneys made a 28-minute presentation to the United States Nuclear Regulatory Commission arguing for an immediate halt to the movement and burial of deadly radioactive nuclear waste next to the public beach at the failed San Onofre Nuclear Generating Station. In an abundance of caution, and a deep concern that the NRC may not publish the proceedings on its SONGS Cask Loading web... END_OF_DOCUMENT_TOKEN_TO_BE_REPLACED

Yesterday, January 21, 2020, the Nuclear Regulatory Commission (NRC) convened a public meeting via teleconference to evaluate Public Watchdogs’ Supplemental 2.206 Petition seeking enforcement action against Southern California Edison, the owners of the failed San Onofre Nuclear Generating Station (SONGS) “ISFSI.” A 2.206 Petition is a legal tool that can be used by the public to revoke a nuclear facility’s license to operate, or to request... END_OF_DOCUMENT_TOKEN_TO_BE_REPLACED

Opinion: California’s San Onofre nuclear plant is a Chernobyl waiting to happen The San Onofre nuclear plant was permanently shut down in 2013 after a radioactive leak was discovered in a new steam generator. Humans will need to manage the plant’s nuclear waste for thousands of years.  (Los Angeles Times)     By Kate Brown Nov. 19, 2019, 9:59 AM – Nuclear accidents often aren’t surprises. Whistleblowers had... END_OF_DOCUMENT_TOKEN_TO_BE_REPLACED

Today, Public Watchdogs filed documents urging the California Coastal Commission to postpone the approval of Southern California Edison’s plan to demolish the spent fuel pools and other structures at the San Onofre Nuclear Generating Station (SONGS).  Get the letter here. Get details for attending the meeting here. Public Watchdogs argues that the vote is premature due to pending litigation, that “special conditions” imposed by Coastal Commission... END_OF_DOCUMENT_TOKEN_TO_BE_REPLACED