If fully developed, a proposed interim storage site could handle all the spent fuel that’s piled up across the country. But there’s opposition.

This story is reproduced under the Fair Use provision of U.S. copyright law.
Please read the original story in the San Diego Union Tribune here.

July 29, 2022 5:30 AM PT,  Is the solution to the decades-long debate over what to do with the nuclear waste at the San Onofre Nuclear Generating Station to be found in a remote section of southeastern New Mexico?

There are still plenty of hurdles to clear but at least theoretically, the spent fuel canisters sitting on a pair of storage sites at the plant could get shipped to an interim storage facility that developers want to construct.

Earlier this month, the Nuclear Regulatory Commission issued a final environmental impact statement that recommended granting a license to a proposed facility on land that is currently used for grazing cattle, in between the New Mexico towns of Carlsbad and Hobbs.

“I’m very optimistic,” said John Heaton, vice-chairman of the Eddy-Lea Energy Alliance, the group named for the two counties in New Mexico that want to build the project in conjunction with energy and nuclear company Holtec International. “We’re going through all the hoops one at a time and going through them carefully and judiciously.” 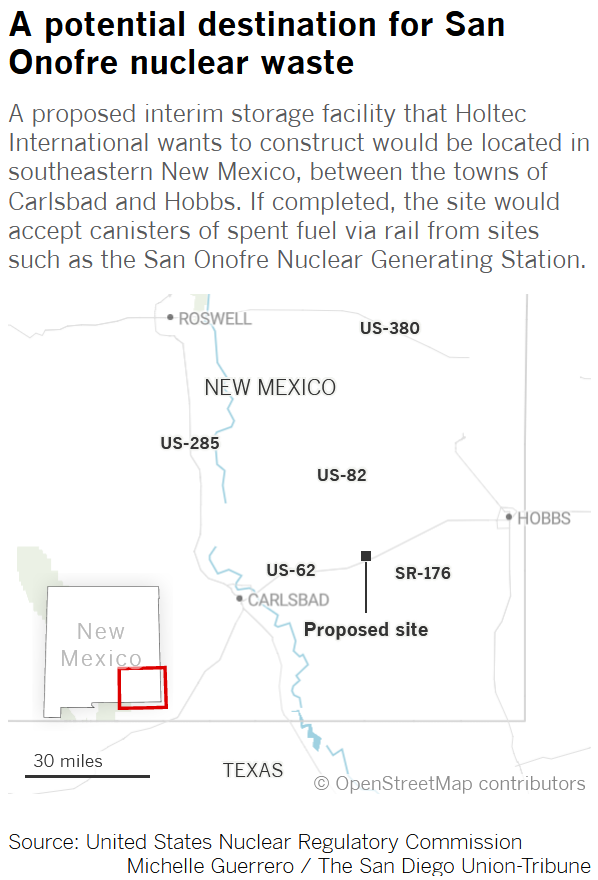 If built, the first phase of the project would store 500 canisters holding about 8,680 metric tons of nuclear waste from commercial plants like San Onofre.

And here’s the kicker: the project’s developers want the facility to expand through 19 more phases, which would see the facility store up to 10,000 canisters. Heaton said that would add up to some 100,000 metric tons or more.

Not only is that enough to easily absorb the roughly 1,610 metric tons of spent fuel at San Onofre, that’s large enough to house all of the 89,000 metric tons of radioactive waste that has accumulated over the years at commercial nuclear power plants throughout the entire U.S.

But the project is hardly a done deal.

The same day the Nuclear Regulatory Commission released its environmental impact report, New Mexico Gov. Michelle Lujan Grisham reiterated her opposition, saying “the NRC is effectively choosing profit over public interest” and the facility “will threaten the health and safety of generations of New Mexicans.”

The San Onofre Nuclear Generating Station, known as SONGS, has not produced electricity since a leak in a steam generator tube in 2012 led to its closing.

The plant is in the process of being dismantled but 3.55 million pounds of radioactive fuel that powered SONGS turbines during its operational lifetime remain. The waste is encased in 123 stainless steel canisters (73 lowered vertically into a recently built storage facility and 50 that rest horizontally at an older storage site) at the north end of the plant.

The canisters sit within sight of the Pacific to the west and are directly adjacent to Interstate 5 to the east. And given Southern California’s history of seismic activity, the casks filled with spent fuel rods have long been a source of anxiety and passionate debate, should something go wrong.

But SONGS is hardly unique. Commercial nuclear plants across the country store their spent fuel on their own premises because the federal government — despite the legal responsibilities of 1982’s Nuclear Waste Policy Act — has yet to find a permanent repository where the waste that has stacked up in 35 states can be shipped.

Some $19 billion was spent on the giant Yucca Mountain underground storage site in Nevada to do the job but in 2010, the Obama administration halted the project, following years of opposition from Silver State lawmakers, including former Senate Majority Leader Harry Reid.

With Yucca off the table, the Department of Energy has taken formal steps to find potential “consolidated interim storage” locations to take waste from commercial plants until the federal government finds a permanent repository.

That’s where the proposed site in New Mexico comes in.

Covering just over 1,000 acres, the project has been dubbed the HI-STORE Consolidated Interim Storage Facility. Heaton said Eddy and Lea counties will sell the land to Holtec, which will construct and operate the facility, and the communities will receive a share of the revenue the project will generate by storing the waste.

Heaton did not offer financial details of the arrangement but said the facility has the potential to be a $3 billion investment.

If approved, the project is expected to be completed by late 2024 or early 2025.

The NRC expects to make a final decision on whether to grant a license in January.

What it could mean for San Onofre

Southern California Edison operates SONGS and officials at the utility say they are open to seeing the proposed New Mexico storage site — or any other facility for that matter — as a destination for the plant’s canisters, provided the project meets the required safety standards, and costs are not unfairly shouldered by Southern California ratepayers.

Edison spokesman John Dobken said the vast majority of the canisters at SONGS currently meet sufficient requirements to allow them to be transported.

“Right now, over 80 percent of those canisters are available to ship if we had someplace to ship them to,” Dobken said, adding, “there’s a lot that goes into the process of shipping canisters that will take time and will still need to be evaluated.” 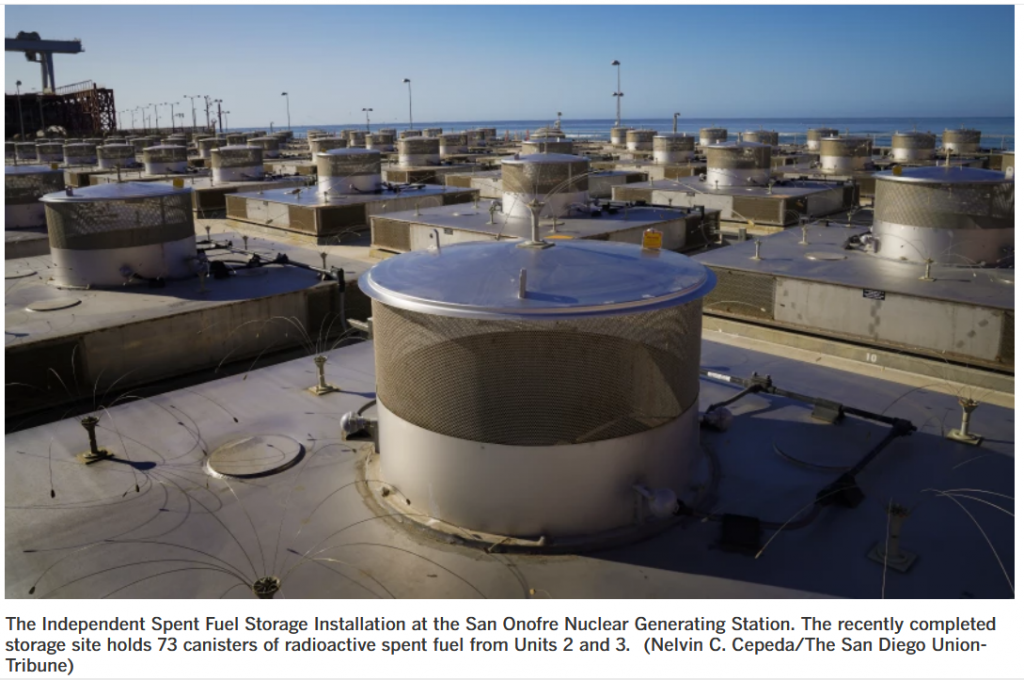 But even if the site in New Mexico gets built, there’s still a question of when or even if the canisters at SONGS will go there.

Those decisions are made by federal agencies, including the U.S. Department of Transportation (the canisters would get shipped to the site by rail). Doubtless, other municipalities, some with nuclear power plants that predate SONGS, will clamor to get in the front of the line.

The Department of Energy has an “acceptance priority ranking” that is colloquially called the “oldest fuel first” principle that gives the nod to waste that has been awaiting shipment for the longest period of time.

While that standard would be advantageous for some of the spent fuel at SONGS (after all, Unit 1 opened back in 1967), the overall effect would result in it taking years for San Onofre waste to be completely removed.

However, “oldest fuel first” is not set in stone and Rep. Mike Levin, D-San Juan Capistrano, has introduced bills on Capitol Hill that would give priority to spent fuel at plants located in areas with large populations and seismic hazards. “Obviously, San Onofre is at or near the top of that list,” Levin said in an interview Wednesday.

“I have said that I will do everything possible to get the waste off our coast as quickly and as safely as we can,” Levin said. “And I would be thrilled if some of the consent issues can be overcome with this New Mexico site and delighted to do all we can to push SONGS to the top of the list.”

Getting consent from sufficient quarters figures to be an uphill battle.

A big reason why the state’s governor is against the Eddy-Lea project is due to fears that an interim site would eventually turn into a permanent site, for all intents and purposes.

The lease proposed by Holtec would run for 40 years and critics warn that once the waste is delivered to an interim facility the incentive for the federal government to ever find a permanent repository will slacken.

“The state of New Mexico will not become a dumping ground for the nation’s spent nuclear fuel due to Congress’s failure to identify a permanent disposal solution for commercial nuclear waste,” Lujan Grisham, a Democrat, said.

Opponents in New Mexico want the state legislature to pass a bill that would prevent New Mexico regulators from approving permits to construct the Holtec facility, even if the NRC approves its license.

Oil and gas companies oppose the project, worrying that an accident at the site could threaten their industries, but the Eddy-Lea Energy Alliance and Holtec point to the NRC’s 736-page environmental report that concluded the project would have no adverse impacts on energy production.

Heaton said the facility would be happy to accept canisters from SONGS.

“Be patient for another couple of years until this facility gets built,” he said. “And then this is the answer to getting …. spent fuel off the coastline and into an interim storage facility where it can be safely stored until there’s a repository built.”

But a number of local groups who have been highly critical of Southern California Edison’s stewardship at SONGS over the years are skeptical the waste will get off the beach anytime soon.

Edison has long insisted the radioactive fuel rods at SONGS are safely stored in the stainless steel canisters and can be taken out of their storage silos and transported without incident but Charles Langley, executive director of Public Watchdogs, worries about the canisters cracking and corroding.

“There will probably scores of legal challenges from communities that don’t want nuclear waste being moved by rail through their cities and towns,” Langley said. “I think it will be at least a hundred years before there’s a solution to this.”

Ray Lutz, national coordinator for Citizens’ Oversight, has similar concerns, and while he would like to see the waste removed from San Onofre, he wonders whether it is right that spent fuel accumulated over the years in California should be shipped to a state like New Mexico that never built a nuclear power plant.

“It’s a matter of fairness,” Lutz said. “Since we benefited from running our air conditioners during that time (that SONGS produced electricity), shouldn’t we have to deal with that waste in our own community?”

Just across the New Mexico border, another interim storage project pitched by a pair of private companies has been proposed.

A joint venture called Interim Storage Partners wants to build a facility in a remote area of West Texas, 35 miles from the town of Andrews. The facility would not be as big as the one proposed in New Mexico — its developers foresee a total capacity of 40,000 metric tons of spent fuel — but the NRC granted the partnership a license to develop the site last fall.

But like New Mexico, the governor of Texas is opposed to its construction.

Gov. Greg Abbott, a Republican, claims the project poses a safety risk to the oil and gas industry in the Permian Basin, one of the most productive areas in the country. Abbott signed onto a lawsuit that the Texas Attorney General has filed in federal court, seeking to vacate the NRC’s decision to license the facility.

Why are gas prices going up when the price of oil is going down? Get the  KUSI interview on this story  with Public Watchdogs’ Executive Director, Charles Langley   There is a schism in the scheme of things. According to the “Laws of Supply and Demand,” the price of a commodity will increase when it is scarce, and decrease when it is abundant. As of this... END_OF_DOCUMENT_TOKEN_TO_BE_REPLACED

That metallic taste in your mouth?  It could be brain damage. People who surf  near the failed San Onofre Nuclear Generating Station (SONGS) are rumored to occasionally report a metallic taste in their mouth while surfing. Southern California Edison (SCE), the owners of the shuttered nuke plant, use a system called “Dilute and Discharge,” to dump radioactive water from its spent nuclear fuel pools into the... END_OF_DOCUMENT_TOKEN_TO_BE_REPLACED