BY SARAH MOSKO   —  Click here to read the story as it appeared in the Observer.

August 8, 2019 — Two recent scandals confirm that public safety is not top priority of either the Nuclear Regulatory Commission (NRC) or SoCal Edison as they lurch forward with a faulty engineering design for removing spent nuclear waste from cooling pools and loading into dry storage at the now shuttered San Onofre Nuclear Generating Station. 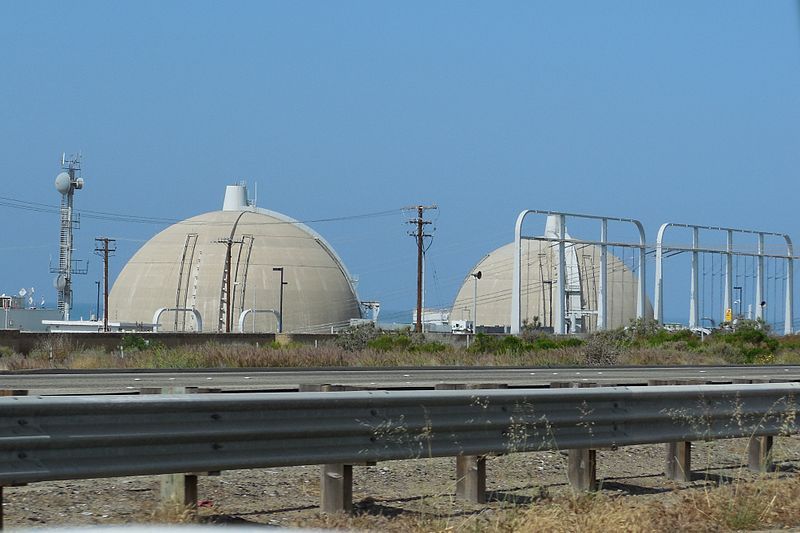 In August 2018, a conscience-driven whistle blower exposed how, because of a system design flaw and human error, a 54-ton canister loaded with highly radioactive waste nearly crashed down 18 feet during a procedure to load it into a dry storage silo in the ground. He also detailed a general atmosphere of neglect for public safety by both the NRC and Edison.
In the latest scandal, it was revealed that the approved loading system can’t avoid scratching the thin (5/8-inch) steel-walled canisters as they are lowered into the concrete-reinforced steel silos. According to the advocacy group SanOnofreSafety.org, the NRC admits that scratches are unavoidable and can trigger cracking which can grow through the canister wall, causing uncontrolled radiation leakage. CEO Kris Singh of Holtec, the company that manufactures the cans, acknowledges that even a microscopic crack would release millions of curies of radiation (one curie is enough to kill you).
According to Charles Langley, executive director of PublicWatchdogs.org, salt from the Pacific Ocean will cause the thin-walled metal cans to fail quickly. “Stainless steel does not really rust when it is exposed to salt, it cracks open. Our experts say that even a minor scratch in one of these cans can pave the way to chloride-induced stress corrosion cracking, and we know that all of the cans have been deeply gouged so far.”
Another concern is that a crack could release the inert helium gas inside the canisters, which works as a fire-suppressant. If water then gets inside, a chemical reaction with any damaged fuel assemblies could cause a hydrogen explosion. Moreover, there is no method for inspecting, repairing or replacing cracked canisters. Despite these concerns, the NRC has given Edison the green light, and canisters continue being loaded into silos with no plan to move them offsite.

While the risks at San Onofre are very different from the 1986 nuclear disaster at Chernobyl, the lesson from Chernobyl is clear: When dealing with radioactive materials, there is no room for design flaws or human errors. Each of San Onofre’s canisters holds the same amount of deadly Cesium-137 that was released during the entire Chernobyl accident, so short-term, money-saving shortcuts that place the public at risk are absolutely unacceptable. And that’s just one isotope. There are thousands of pounds of plutonium in the 73 canisters that will be stored at the beachfront San Onofre Nuclear Waste Dump, and plutonium is deadly for 250,000 years. Legal documents secured by SanOnofreSafety.org reveal that the canisters are only warranted for 25 years and the silos for 10. 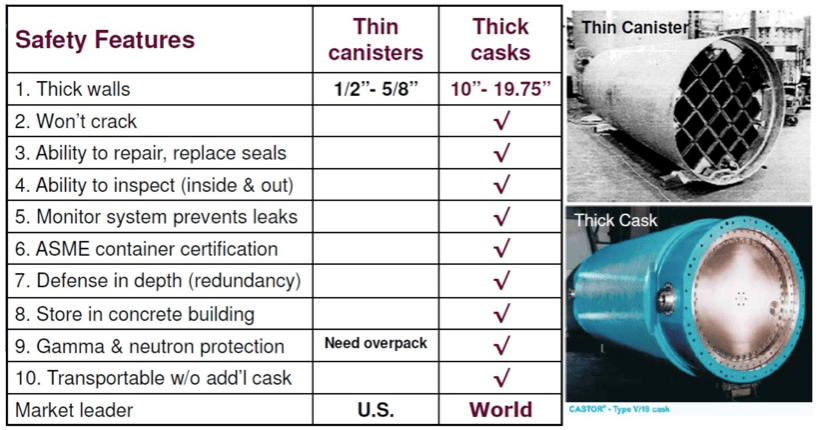 Donna Gilmore of SanOnofreSafety.org is advocating for storage casks with at least 10-inch thick walls instead of the thin-walled canisters in current use (see comparison table below). Langley agrees, stating that “The American people deserve thick-walled casks like the ones that are used in well-regulated countries such as Germany.” Both also agree that long-term storage at San Onofre is inherently unsafe because of risk of earthquakes/tsunamis and vulnerability to terrorist attacks.
As of last month, 30 thin-walled canisters with 100,000 pound payloads of deadly nuclear waste had been buried in the silos at San Onofre. The 43 remaining canisters will be loaded in the coming months.
Contact SanOnofreSafety.org or PublicWatchDogs.org to learn more and get involved.
The Nuclear Regulatory Commission will hold a meeting to update the public and take their questions and comments on spent-fuel storage related issues.  The “town hall” style meeting, will be held from 7pm to 8:30pm on August 20, 2019 at the San Juan Capistrano Community Center, 25925 Camino Del Avion.
Share on Facebook Share
Share on TwitterTweet
Share on Pinterest Share
Share on LinkedIn Share
Send email Mail

Former Chair of  U.S. Nuclear Regulatory Commission rejects nuclear energy as “not safe” and “not smart” Dateline May 12, 2022 —  E, the Environmental Magazine, has published a compelling article by journalist Sara Mosko titled the Insanity of Expanding Nuclear Energy.  The story explains how four of the world’s top nuclear regulators have issued a joint statement rejecting nuclear energy as a clean, green solution to... END_OF_DOCUMENT_TOKEN_TO_BE_REPLACED

Trained workers at the Pilgrim nuclear power plant in Massachusetts are claiming  that skilled nuclear technicians are being replaced by unqualified “Homer Simpsons” as a way of cutting labor costs for the plant’s new owner, Holtec International. Holtec’s legal record includes criminal activities such as bribery and outright lying to elected officials, so it is no surprise that the company has serious management problems that have... END_OF_DOCUMENT_TOKEN_TO_BE_REPLACED