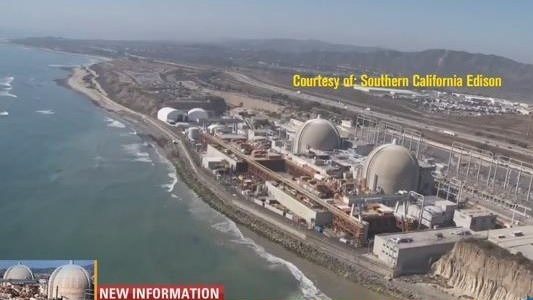 CBS NEWS SAN DIEGO (CNS) – The cause of a leak in 2012 that led to the permanent shutdown of the San Onofre Nuclear Generating Station was steam generators being deliberately run too hot, too hard and too fast, according to a report released Tuesday by an independent watchdog organization.

The analysis asserts that operators of the plant in northern San Diego County intentionally red-lined the system beyond its breaking point until it was overloaded and began to shake itself to pieces, according to the Public Watchdogs organization.

The study was conducted by Vinod Arora, a former fire protection engineer at Southern California Edison, co-owner of the power plant with San Diego Gas & Electric, according to a statement released by Public Watchdogs.

The conclusion was based on confidential documents that were released by the Nuclear Regulatory Commission under the Freedom of Information Act.

“Edison knew they were pushing San Onofre’s steam generators past the original design limit, but did it anyway for the sake of short-term profits and to correct other design deficiencies as a result of SCE’s unverified analytical assumptions,” Arora alleged.

“SCE was forced to make those assumptions because of time pressures to deploy the generators quickly,” Arora said. “As a result, SCE failed to perform the necessary research or ask the critical questions required to understand the impact of their design changes between the original and replacement steam generators.”

Shaking steam tubes, or what SCE called “critical in-plane vibrations” from tubes filled with superheated pressurized radioactive water, caused the tubes to bang together violently as a result of dry steam, according to Arora.

He said the impact of the abrasion and metal fatigue from the tube collisions ultimately created dangerous leaks.

Previous investigations have faulted the design of the steam generators, manufactured by the Japanese firm Mitsubishi Heavy Industries. Edison, which has retired San Onofre’s two reactors, is seeking financial compensation from the company.

Why are gas prices going up when the price of oil is going down? Get the  KUSI interview on this story  with Public Watchdogs’ Executive Director, Charles Langley   There is a schism in the scheme of things.  According to the “Laws of Supply and Demand,” the price of a commodity will increase when it is scarce, and decrease when it is abundant. As of this... END_OF_DOCUMENT_TOKEN_TO_BE_REPLACED

That metallic taste in your mouth?  It could be brain damage. People who surf  near the failed San Onofre Nuclear Generating Station (SONGS) are rumored to occasionally report a metallic taste in their mouth while surfing. Southern California Edison (SCE), the owners of the shuttered nuke plant, use a system called “Dilute and Discharge,” to dump radioactive water from its spent nuclear fuel pools into the... END_OF_DOCUMENT_TOKEN_TO_BE_REPLACED